News: THE STORYTELLERS – NEW VOICES OF THE TWILIGHT SAGA 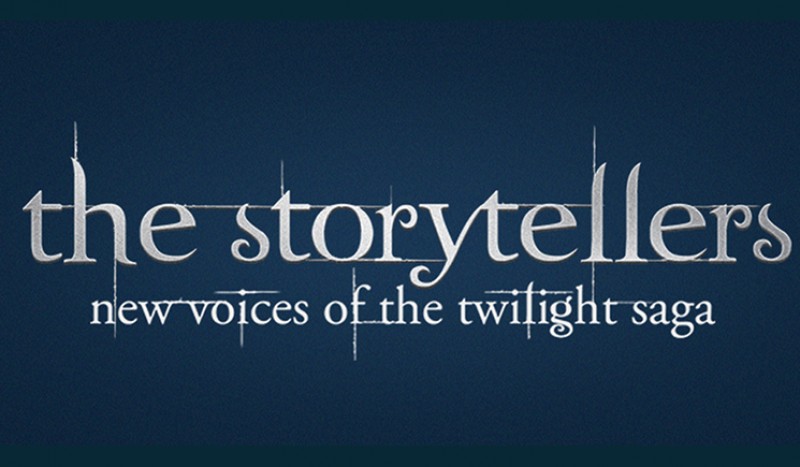 Have you heard the exciting news that was first reported today by The New York Times!?

Lions Gate and Stephenie Meyer, the creator of the vampires-and-werewolves “Twilight” saga, on Tuesday announced plans to select five aspiring female directors to make short films based on “Twilight” characters. The mini-movies, financed by Lions Gate and its production partners, will be shown exclusively on Facebook next year.

Lionsgate, Facebook, the Women In Film organization, the crowdsourcing platform Tongal and Fickle Fish Films’ (and Twilight Saga author) Stephenie Meyer are teaming up for the campaign called “The Storytellers – New Creative Voices of The Twilight Saga” which will include films based on a broad spectrum of characters from the Twilight universe, with guidance provided by Meyer’s acclaimed and encyclopedic The Twilight Saga: Official Illustrated Guide.

Aspiring female filmmakers will have an opportunity to direct short films based on characters from the Twilight universe. The films will be produced and directed with the mentorship of a star-studded group of female panelists including: Stephenie Meyer, actress Kristen Stewart, Academy Award winners Kate Winslet and Octavia Spencer, Jennifer Lee, the award-winning writer and one of the directors of Disney’s global blockbuster Frozen, Twilight director Catherine Hardwicke, Emmy Award-winning actress Julie Bowen, and Women In Film President Cathy Schulman.

We will have much more to share in the upcoming days and weeks about this exciting project!

Here is the official press release for more information:

LIONSGATE TEAMS WITH STEPHENIE MEYER, FACEBOOK AND WOMEN IN FILM TO CREATE SHORT FILMS COMPETITION BASED ON CHARACTERS FROM THE WORLD OF TWILIGHT

VANCOUVER, BC, and SANTA MONICA, CA —  September 30, 2014 — As part of its ongoing effort to enhance its diverse portfolio of premium content, Lionsgate (NYSE: LGF), a premier next generation global content leader, is teaming with Facebook, the prestigious Women In Film organization, the crowdsourcing platform Tongal and best-sellingTwilight Saga author Stephenie Meyer to create and manage a social media campaign to develop and produce a series of short films directed by aspiring female filmmakers.  The campaign, called “The Storytellers – New Creative Voices of The Twilight Saga,” will include films based on a broad spectrum of characters from theTwilight universe, with guidance provided by Meyer’s encyclopedic The Twilight Saga: Official Illustrated Guide.

The campaign will center on a multiphase contest culminating in the selection of at least five aspiring female filmmakers to direct short films based on characters from the Twilight universe.  The films will be produced and directed with the mentorship of a blue chip panel of advisors, which will ultimately select the winning shorts that will premiere exclusively on the Facebook platform next year.  The star-studded group of female panelists will include Stephenie Meyer, actress Kristen Stewart, Academy Award winners Kate Winslet and Octavia Spencer, Jennifer Lee, the award-winning writer and one of the directors of Disney’s global blockbuster Frozen, Twilight director Catherine Hardwicke, Emmy Award-winning actress Julie Bowen, and Women In Film President Cathy Schulman.

Five winning shorts will be financed through production advances, and fans will help select a grand prize winning filmmaker who will receive a cash prize and career opportunities.  The short film development and production process will involve extensive fan engagement on the Facebook and Tongal platforms.

“More people than ever before are creating, discovering and engaging with videos on Facebook,” said Facebook Vice President of Partnerships Dan Rose.  “This collaboration with Stephenie Meyer, Lionsgate and Women In Film is a great opportunity to engage Twilight’s massive global audience on Facebook through an innovative premium video program.”

“We’re delighted to expand our longstanding relationship with Stephenie and confident that her participation in theTwilight short films campaign will add an exciting new dimension to the incredible world she has created as an author and producer,” said Lionsgate Chief Executive Officer Jon Feltheimer and Vice Chairman Michael Burns. “Our partnership with Facebook and Women In Film underscores the opportunities for growing our franchises in exciting new directions, and we’re pleased to introduce fresh creative talent to the Twilight universe as part of our commitment to female empowerment in front of and behind the camera.”

“Accessing Hollywood is a momentous challenge, especially for aspiring female filmmakers, so I‘m thrilled that Women In Film has been invited to join Stephenie Meyer, Lionsgate and Facebook to empower new storytellers with diverse voices,” said WIF President Cathy Schulman.  “Women In Film is proud to help recruit and mentor female filmmakers as part of a project that illustrates the power of a beloved book and movie franchise to lessen the gender gap in our film community and provide a platform for women’s perspectives to be seen and heard.”

“The female voice is something that has become more and more important to me as I’ve worked in the film industry,” said Meyer.  “I’m honored to be working with Women In Film, Lionsgate, and Facebook on a project dedicated to giving more women a chance to be heard creatively.”

ABOUT WOMEN IN FILM

Women In Film (WIF) is a non-profit organization dedicated to promoting equal opportunities for women, encouraging creative projects by women, and expanding and enhancing portrayals of women in all forms of global media. Given that women comprise fifty percent of the population, WIF’s ultimate goal is to see the same gender parity reflected on and off screen: in management positions as well as in front of and behind the camera. Founded in 1973, WIF focuses on advocacy and education, provides scholarships, grants, film finishing funds, mentorships, film and television shadowing programs, participation in its award-winning PSA program and access to employment opportunities. WIF also works to preserve the legacies of all women working in the entertainment community. For more information visit www.wif.org.

ABOUT THE TWILIGHT SAGA

Meyer’s Twilight Saga books have sold more than 120 million copies worldwide and have been translated into at least 38 languages around the globe, winning the 2008 British Book Award for “Children’s Book of The Year” for Breaking Dawnand the 2009 Kid’s Choice Award for Favorite Book for the series as a whole. The five films of The Twilight Sagafranchise have grossed more than $3.3 billion at the global box office, ranking among the most successful feature film franchises of all time.

Lionsgate, home to The Hunger Games, Twilight and Divergent franchises, is a premier next generation global content leader with a strong and diversified presence in motion picture production and distribution, television programming and syndication, home entertainment, digital distribution, new channel platforms and international distribution and sales. Lionsgate currently has more than 30 television shows on over 20 different networks spanning its primetime production, distribution and syndication businesses, including such critically-acclaimed hits as the multiple Emmy Award-winningMad Men and Nurse Jackie, the comedy Anger Management, the broadcast network seriesNashville, the syndication success The Wendy Williams Show and the critically-acclaimed hit series Orange is the New Black.

Its feature film business has been fueled by such recent successes as the blockbuster first two installments of The Hunger Games franchise, The Hunger Games and The Hunger Games: Catching Fire, the first installment of the Divergentfranchise, Now You See Me, Kevin Hart: Let Me Explain,Warm Bodies, The Possession, Sinister, Roadside Attractions’ A Most Wanted Man and Pantelion Films’ breakout hit Instructions Not Included, the highest-grossing Spanish-language film ever released in the U.S.

Lionsgate’s home entertainment business is an industry leader in box office-to-DVD and box office-to-VOD revenue conversion rate. Lionsgate handles a prestigious and prolific library of approximately 16,000 motion picture and television titles that is an important source of recurring revenue and serves as the foundation for the growth of the Company’s core businesses. The Lionsgate and Summit brands remain synonymous with original, daring, quality entertainment in markets around the world.

One Response to News: THE STORYTELLERS – NEW VOICES OF THE TWILIGHT SAGA